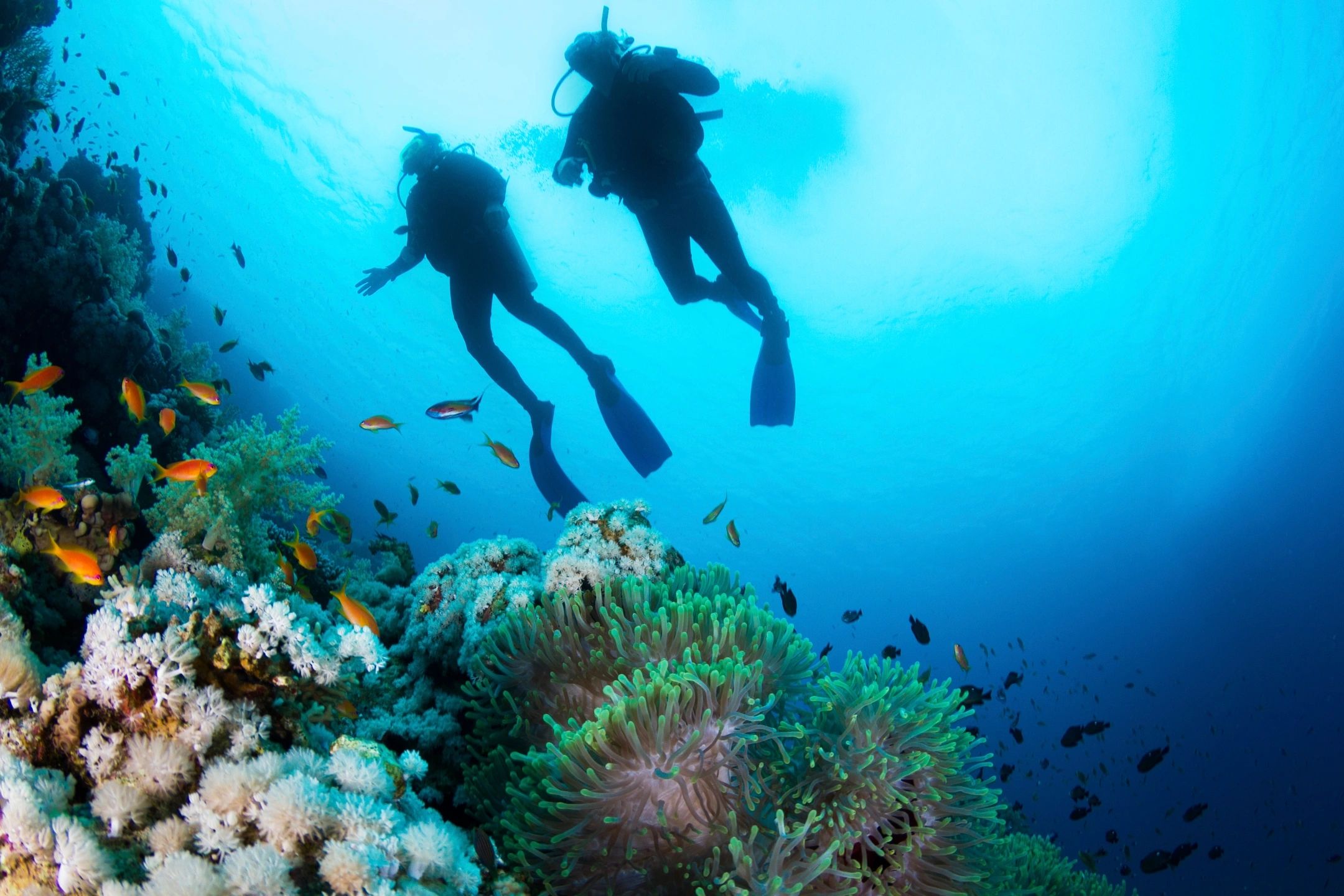 It’s on many bucket lists. Diving the Great Barrier Reef. It is after all, the largest living thing on Earth, even visible from outer space. The reef is made up of over 2900 individual reefs, 600 continental islands and 300 coral cays.

It was the ultimate family vacation. Just the four of us traipsing through Australia. It was probably a once-in-a-lifetime trip, at least with all of us together, so diving the Great Barrier Reef seemed to be one of those must-do, bucket-list experiences.

We took a short flight from Sydney to Cairns to begin our adventure. Stepping off the plane in Cairns, we were quickly reminded what a sub-tropical climate is. The humid heat was almost suffocating. We headed to our hotel and decided to rest up for our big day which included an early morning wake-up call. I think I was the only one a bit nervous about diving as my last experience was, shall we say, terrifying, and involved a surprise face-to-face encounter with a 300-pound grouper in a cold, dark cave.

I had done pretty extensive research on the best locations of the reef to visit and the best dive groups to take you there. We arrived at the dock and boarded our luxury catamaran. I must say,   the precision with which the divemasters boarded and assembled everyone into groups according to skill level was pretty impressive. After watching a few “how to” videos, it was time to sign the waivers and medical forms. I let my college-age kids complete their own forms. My daughter, truthfully, checked the box that she had asthma. My gut told me this could be a red flag and just as I was about to tell her to scratch it out and check “no,” I looked up to see a video playing about the importance of being honest in completing the forms. I secretly crossed my fingers and handed the forms to the divemaster. He took one look at her form and uttered those three crushing words, “She can’t dive.” What? She had endured the 24+ hour plane trip just for this experience. She was devastated. I was devastated. Apparently, the rules prohibit her from diving without a doctor’s note (couldn’t they have told me this when I booked the trip weeks earlier)?

My daughter acquiesced and joined the snorkeling group. With butterflies already doing somersaults in my stomach over the thought of taking my claustrophobic body deep under water, I was tempted to trade in my regulator for a snorkel. But no! I had to overcome my fear of diving and prove to myself that I could do it.

We arrived at our first designated spot on the reef. I was surprised to find that there are many sections of the reef that are visible above water. Those areas are clearly dead but the section just inches below the water line is very much alive. Prior to our trip, I had read numerous articles about the current state of the reef. There’s much debate in the oceanographic and environmental communities about the slow death of the reef. I wasn’t sure what we’d find when we got there, but I’m here to tell you the reef is alive and well and amazing. The reef is after all, the largest living thing on Earth, and even visible from outer space.

After testing out some basic skills underwater, linked arm in arm with my son, we started the downward descent to the reef. I immediately remembered from my first experience diving, how the fear leaves you the minute you see the amazing underwater world. I knew it was going to be beautiful, but I can only describe it as magical. The abundance of bright, colorful underwater creatures was truly astounding. I felt like I was in a real life Pixar move.

The divemaster signaled that we were changing locations in search of sea turtles. We lucked out and as soon as we reached the appropriate depth, an enormous sea turtle swam right under our bellies. They’re even larger than I had expected but the most graceful creatures, and he seemed unfazed by the dozen or so sets of legs dangling above him.

Before I knew it, our thirty minutes were up and I was slightly disappointed that it was time to ascend. We climbed back on board, shed what felt like 50 pounds of cold, salty gear, and with the adrenalin still pumping through my body, I thanked everyone on board for helping me not only get through, but love, the experience. I reunited with my daughter to find that she had actually enjoyed her snorkeling excursion. I decided to forgo my afternoon dive and snorkel with her. As the boat headed to a different section of the reef, one of the divemasters was giving a talk on the best areas for snorkeling and I’m so glad we attended it. While many others went off in organized groups, my daughter and I decided to venture off on our own with no agenda. This proved to be my best decision of the day.

We found a steep wall of the reef and since we separated from the group, we had the entire wall all to ourselves. The fish, coral and living organisms we saw along the wall were (dare I say) better than anything I saw when diving. And without being tied to a dive buddy and regulator, we could get much more up close and personal with the sea life. We spotted eels, angelfish, clown fish, sea turtles, grouper and innumerable types of soft coral.

As the day came to a close and we headed back towards shore, I treated myself to a tropical drink at the bar and sat on deck feeling the greatest sense of accomplishment. Not only because I had conquered my fear, but because I had exposed my kids to one of the world’s greatest wonders, and that we were all able to experience it together.