Suicide on college campuses: Finding out what love means…

Another college student has committed suicide on a college campus. This time, it hit close to home as it was a friend and fellow student of my son. 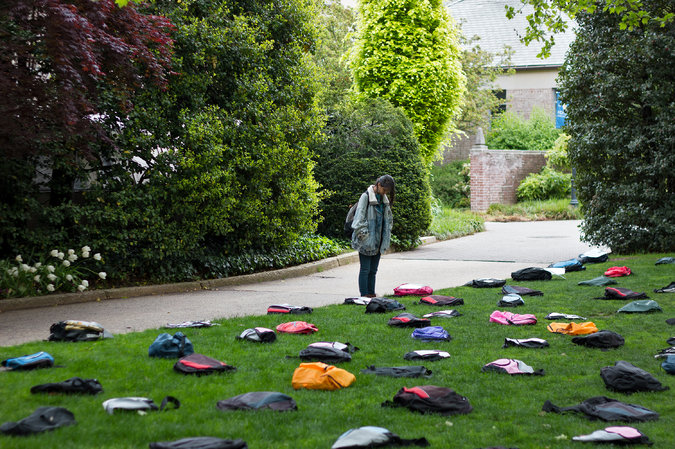 A traveling exhibition by Active Minds, an advocacy group, consists of 1,100 backpacks representing the approximate number of undergraduates who commit suicide each year.

My heart physically hurts for these students who feel such sadness and despair that they see no other option. I’ve seen that sadness and despair firsthand. Two years ago, my son, a very academic, confident and social kid, reached this level of despair his freshman year of college. He kept saying to me, “I just don’t feel like I belong here.” As a parent, I brushed it off as difficulty adjusting to this new life at college. But it was the phone call one night when he said, “I understand why people commit suicide,” that set me into action. I immediately flew to his college to rescue him. I sought the help of the college counseling center and was surprised how quickly they sprung into action. His first counselor was not a good fit so we kept going until we found the right one. I learned just how broken our mental health system and discovered the alarming lack of qualified psychiatrists and psychologists – who can wait eight weeks to see someone when you’re in crisis? I didn’t leave until I felt he was in a safe place, mentally. I was his only advocate and I realized at the time how important it is that anyone in need have an advocate. He also made the bold choice to confide in a new friend and that was really the turning point. When he saw how supportive she was, he gained the courage to talk to his professors and found an even broader network of support.

I chalked it all up to adjustment disorder but in the end, he was diagnosed with depression brought on by this life change (yes, there are situational types of depression) and an obsession with success/perfectionism (OCD). I’ve since learned that obsession with perfectionism is reaching epidemic proportions among today’s college students (that’s another blog post!). If there’s one piece of advice I offer parents, it’s “take every conversation seriously. Don’t wait. Don’t think they’re going to find help on their own. Go. Go quickly. And don’t stop until you find the resources that make you feel comfortable.” (Okay, that was several pieces of advice.) Fortunately, my son is one of the success stories. Through counseling that he continues today, two years later, he’s exceptionally happy and healthy (but that doesn’t mean I don’t still worry that depression will rear its ugly head again). He discovered meditation, rock climbing and the importance of a healthy diet that helped him cope and are now a steady part of his life. His interest in really understanding why his brain was doing this to him led him to take a neuroscience class which has now led to a double major in psychology.

Since this experience, I’ve looked for groups or organizations to get involved with. Every time I hear or read the story of a college student who takes their own life, I feel this immense pain and yearning to do something – something to stop one more young person from feeling such hopelessness. There are a number of great organizations working to educate college students on mental illness, remove the stigma, and prevent suicide. (My bigger question is: why are there so many disjointed groups and why can’t they band together for a much larger impact?)

I can’t help but wonder if these young college students even consider it mental illness or depression (those are big scary words), or if they really don’t understand their feelings and what’s causing them. I do believe that stress plays a huge role in this and I wonder if we need to spend more time teaching coping skills. Both of my kids were required to take an alcohol education class before starting college, but isn’t the ability to cope with a new environment, stress and emotions more important? (And yes, stress, depression and alcohol all go hand-in-hand.)

So where am I going with this? I don’t know. I just want to move people to action. I thought of joining one of the existing organizations or even starting my own but I think my son said it best in his Facebook post following his friend’s death:

“Today I learned what love means.

Two years ago, I was diagnosed with depression and obsessive-compulsive disorder and was prescribed an SSRI. As we near the end of National Mental Health Awareness Week, I can’t help but pause as I take my meds every night. 1 in 4 Americans experiences a diagnosable mental illness in any given year. Suicide consistently ranks in the top 3 causes of death for people aged 15-34. But better pills and more doctors are not the solution.

Today I learned what love means. Today the Blair community came together over the heartbreaking loss of a fellow student, musician, and a dear friend. But the unabashed love and compassion and sympathy and communication that today we proved we are capable of was incredible. This has to be our response to the inevitable pain of life, not pills or better time management or more distractions. The only way we could hope to respond to tragedy like that which we experienced today is to communicate with and to love each other more openly, more frequently, and much more fiercely than we already do.”

I’m so proud of him for being an outspoken advocate of mental health and not hiding behind his diagnosis. At the end of the day, I think the solution has to come before we talk about mental illness and suicide prevention – we have to to do something before it gets to the point of needing prevention. It has to be about loving one another and opening up and talking to each other. We have to get these kids to realize that they’re often not alone in this. When I asked my son why some kids don’t choose to talk to a friend about it, his response was, “because everyone is busy and caught up in their own life.” That’s a sad, but true, statement.

I have reached out to a couple of organizations to see if my time and talents can be utilized on true hands-on initiatives that will have measurable impact. I wanted to share some of the great programs that target college students I’ve discovered – I especially love the “Send Silence Packing” program.

Here’s a compelling New York Times article I encourage you to read: Suicide on Campus and the Pressure of Perfection. Another recent article noted: “Research is beginning to identify the millennial generation as higher risk for certain types of depression, like at work, evidenced by high absenteeism rates,” Ivankovich tells Yahoo Health. “The levels of stress that they are under, whether self-imposed or otherwise, makes them candidates for lots of mental health concerns.”

Chances are, you will encounter someone who has been touched by suicide at least once in your life. If you have a child in college or have friends with children in college, encourage them to share these resources on their campus.

Our Larry King segment on the Eating Disorder Orthorexia

My stint in rehab

McMillion$ documentary and my week as a faux...

I am the sandwich generation of cannabis

Lessons from my dad on travel

I am the caregiver for my mother: What...

My life was perfect. Then it wasn’t.

To My Daughter: You Can Be Anything You...

We use cookies to ensure that we give you the best experience on our website. If you continue to use this site we will assume that you are happy with it.OkPrivacy policy