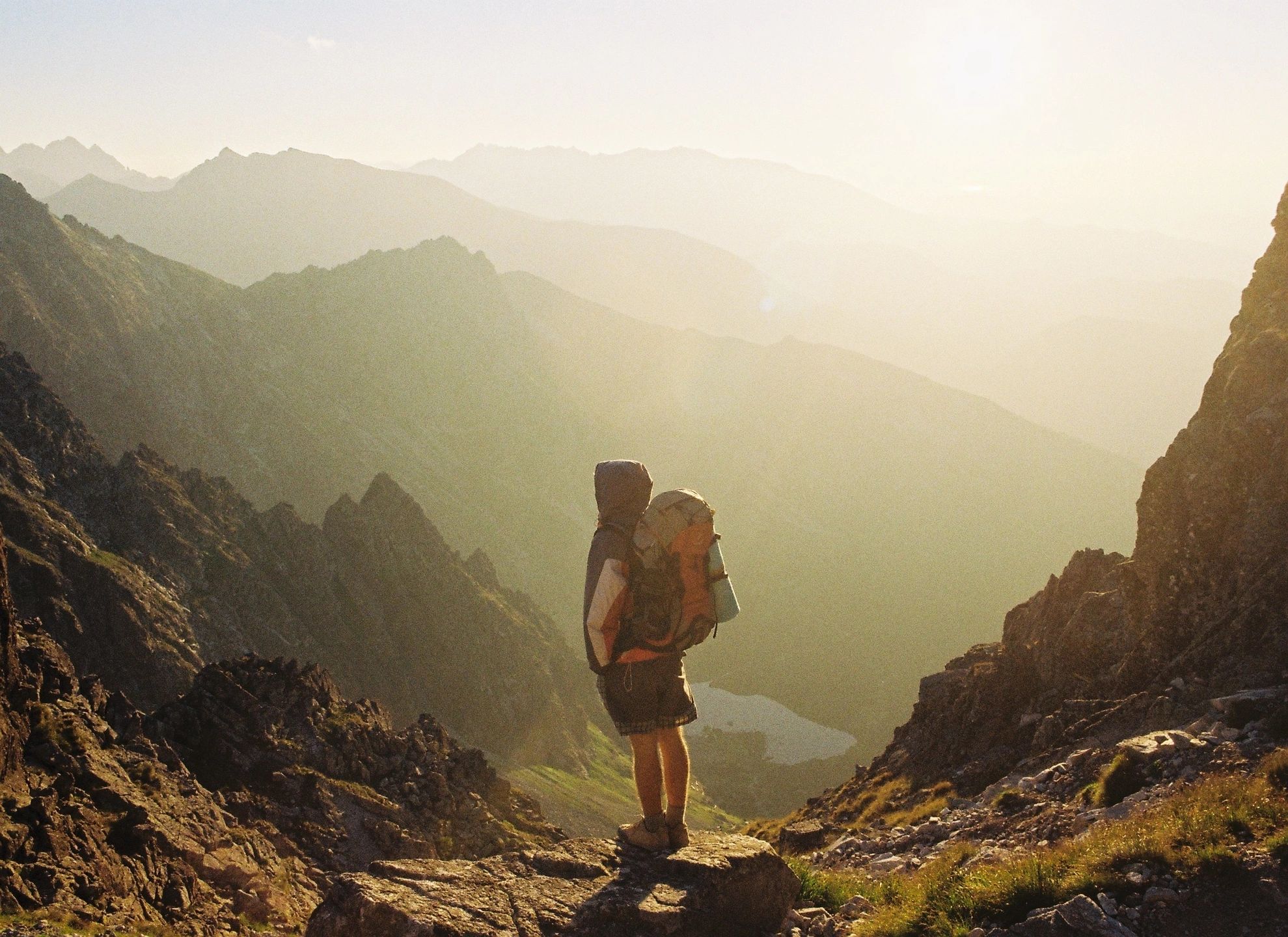 My son had talked for months about his desire to go to India. But he’s a dreamer so I didn’t pay much attention. Until the day he announced that he was actually going. With no agenda. No reservations. No contacts. Just he and his backpack. Thailand for 3 weeks and India for 4 weeks. He was on somewhat of a gap year adventure as he was enroute to Australia to study abroad.

A lot of my friends were incredulous that I would allow him to go. Many said no way would they let their child go while others said they wished they could be more like me and encourage wanderlust.

I’m the type of person who leaves nothing to chance. When I travel, I literally map out every minute detail down to the hour. So there are no surprises, no stress. It took a lot of self-restraint (and sleepless nights) to let him pursue this completely disorganized dream. In a foreign country.

He gets this desire to see the world from me. We moved to Italy when my kids were just 7 and 9 because I wanted to instill this wanderlust in them. So I could hardly tell him he couldn’t go.

His departure date was chosen and my protective mama bear instinct went into full blown planning mode. I went to REI and bought him packing gear, a travel blanket and pillow and other accessories to ensure his comfort. And knowing the sanitary standards are nonexistent in India, I bought him hand wipes, antibacterial gels, charcoal tablets for food poisoning and myriad other just-in-case products. Sadly, much of this went back to the store because he was, after all, taking a single backpack for his 8-week journey.

Aside from the physical preparation, there was the mental prep that was necessary. Not only for him, but all of us. His former FBI agent father gave him the talk, about trust no one, lock your backpack to your hostel bed post when you leave, keep your head up and out of your phone and the most obvious, pay attention to your surroundings. I gave him the “if I don’t hear from you in 48 hours, I’m calling the Embassy” lecture. I bought him an extended cell phone battery (can you believe Indian trains don’t have charging stations?) and loaded up a SIM card so he could easily, and always, reach me.

And with much ado, the fateful day came to put him on that plane to Thailand. His lack of organizational skills (he did NOT inherit my obsessive organizational gene) had us sitting in the hotel lobby until literally hours before his flight, packing and repacking his backpack. We were programming the new SIM card for his phone on the way to the airport. It was frantic and stressful beyond words, but so incredibly exciting.

Fast Forward: Day 3 of his journey when I get the middle of the night text: “I lost my debit card. What should I do? I need cash for the hostel tonight.” No worries, I had given him not one, but two, backup credit cards. Crap! But he needed cash. I had not set them up to withdraw cash. I’ve used the same bank for 25 years and being one specifically for the military meant they were 24/7 to accommodate soldiers around the world. So I called only to learn they were no longer 24/7 but now kept bankers’ hours. That didn’t help me! I went online to see if I could set the card for cash withdrawals. Whew – there was an app for that. But then the dreaded “Processing error. Please contact your bank.” appeared. Crap again! So I moved on to backup credit card number 2 and that one worked! Now, I dreaded the next seven weeks even more. If this was what was in store for me, I would not survive.

As I textured (text lecture), he replied, “Please refrain from lecturing until I actually figure this shit out.”

Then the cheery uplifting texts started coming. He was sleeping n a beach hut for $10 a night, eating meals with the locals and making new friends. He was climbing cliffs hanging out over the Indian Ocean (this passion, I have had to learn to live with).

Then another 3:42 am text. “Can you do me a favor? I just found out I need a Visa for India. Can you get me one?” Ugh…he really should have taken advantage of my travel planning skills.

As his time in Thailand came to an end, with no major problems, I could now focus on stressing out over India. Again, no itinerary, no idea where he’d stay or how he’d get there.

He arrived in India and within hours I got the text. “This place is insane.”  I asked was it a good insane or a bad insane. He replied, “Both.” Then he told me how cows roam the streets like stray cats. And the filth. He was thrust into this crazy unsettling world despite my trying to forewarn him what I’d read about the country. Actual texts: “New Delhi is seriously a horrible place. I’m leaving tomorrow. It’s just like so different from any place I’ve ever seen. I’ve never thought somewhere could be this dirty.”

Then a Facebook message: “My data is not working and there’s little to no wifi anywhere here. I’m getting a PDP authentication error when I try and use cell data. I’m basically stuck.” Ugh. I was afraid of this. Numerous phone calls and some rather angry exchanges with our cell phone company got us no where. Fortunately, the next day his phone was working. It was simply a matter of his new location needing to catch up with his phone.

Fast forward to day 4 in Rishikesh, India. The text: “going to live with a tabla teacher and his family. Very nice. Not sure when I’ll have wifi, but will be in touch when I can.” Are you freaking kidding me? And what the hell is a tabla?

The next day, I’m sitting in a pretty important roundtable meeting with 12 people from around the country. Being the obsessive Mom I am, I always keep my cell phone nearby in case my kids need me. My phone buzzed in my lap and it was him. “Can I call?”  Ugh…could you just give me a little more detail? Is it a good thing or a bad thing? I excused myself from the meeting and told him to call me.

He was talking so fast and my heart was racing so I had to ask him to keep repeating himself. Turns out, he was negotiating a price for this teacher to give him lessons and let him live with them for two weeks. We had set a daily budget of $20 but the teacher wanted a bit more. But if he was comfortable with them and was going to be safe, I was fine with it.

This proved to be one of his most memorable experiences of the trip. He slept on a mat in a temple next to their home. The teacher, who insisted on being called “Guru”, would wake him up early in the morning and take him into the mountains to teach him ancient philosophy. Then they’d return, he’d give my son a bucket of cold water for his morning shower (precisely why India is not on my bucket list!) and they’d sit down to breakfast with the family. Guru ran a school for homeless children and my son would help him out at the school between his time wandering the streets.

There were the occasional texts: “Very tired. Stomach is bad because eating Indian food all day. But still fun. Lots to tell you about.” and “Can we talk on the phone sometime? I’m feeling pretty homesick actually.” that broke my heart because I wasn’t there for him. After getting the homesick text, I offered to fly him home early or even (gasp) fly to India to spend the last week with him, but he indicated it was more the lack of a language problem as he didn’t have people to talk to and interact with daily.

And in more never a dull moment news, there was this: “A monkey tried to take my food today and I had to fight him with a stick.” and “I think I have a mild concussion. Do I need to do anything?” Lord help me! Turns out Indian doorways are not made for nearly 6-feet tall Americans.

Then he boarded the 30+ hour train to his next destination. “Traveling in India is going to age me by at least 5 extra years,” he texted. Then, “Varanasi is hot, mosquito-infested, and the streets are literally paved with cow shit. I’m done with India.”

I’m getting too lengthy here so I’ll have to tell you about his week with the monks, in which he helped them take new Facebook profile photos,, another time. He now has four mutual friends with the Dalai Lama and he gained a whole new appreciation and understanding of that culture. But that’s a whole other lengthy blog post.

In the end, it was an amazing, life-changing experience for him, and for me. Would I change anything? Absolutely not. It was stressful, chaotic, at times heartbreaking, but he’ll always appreciate this gift we gave him, and he learned so much about letting his free spirit soar.

I hope you’ll take a few moments and watch the short video he made of the highlights of his trip.

Here was his post: “Just 5 minutes from the most incredible 2 months of my life. New York – Thailand – India. It’s strange that the most fundamental wisdom is often the hardest to come by. It took me halfway around the world to learn that the most important thing is life is not what you’re doing, but who you’re doing it with. To everyone I befriended, shared a conversation with, or even exchanged a smile with, thank you for showing me the truth. I’ll cherish the memories of you all for the rest of my life.”

12 thoughts on “Letting my son walk through Asia. Alone.”